Heck of a Job, Obama!


As we mark the 6th anniversary of Hurricane Katrina, it's increasingly clear, the really big storm headed our way is economic...

It's the lull before the storm—the perfect storm. No, not another Irene or, even worse, Katrina.

The really nasty storm that awaits us is economic.

As everyone focused on Irene, our growth rate for the second quarter weighed in at a paltry 1%—revised downward from the reported 1.3% at the end of July.

The stock market’s gyrations—reminiscent of the volatility preceding “The Crash of 1929,” compared then to Coney Island’s “Cyclone” roller coaster—is reflecting fear over our seriously ill economy, still laden down with massive debt and corruption that favors “too big to fail” institutions, whose misdeeds during the 2008 financial meltdown have been rewarded with more favoritism at the little guy’s expense.

Before President Obama escaped to Martha’s Vineyard—instead of a more humble location where he could have listened to and felt Americans’ pain—the market was down 635 points, up 430 points, (then came S&P’s downgrade), down 520 points, up 423 points, and down 419 points—in just two weeks.

Obama’s plummeting polls, in turn, are reflecting dissatisfaction with his anemic response to the anemic economy. 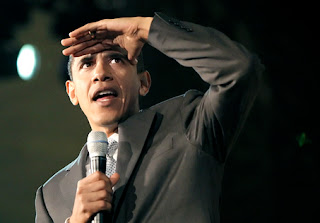 But, now, we’re assured, he started developing that jobs plan on lush Martha’s Vineyard, which he’ll unveil early September. What about January 2009? Why not then, when it was job one? What? He needs golfing on Martha’s Vineyard to get creative? Thus, all we got was that boondoggle trillion dollar stimulus we were assured was needed to keep the unemployment rate, now 9.1%, below 8%?

Meanwhile, Americans are battening down the hatches to try to weather this perfect storm barreling our way from Europe, collapsing under the weight of its own dismal growth and debt-laden consequences, making growth less likely and the vicious cycle prefiguring global economic collapse—in the absence of leadership—more likely.

Leadership, you say? Yes, leadership! The absence of which Ruth Marcus was one of the first to broach six months ago in her “Obama’s Where’s Waldo Presidency?” piece, noting, “On the biggest issues, the president is often hard to find.”

Everyone was aghast. But, she was only stating the obvious. By now, it’s a steady drumbeat, with Mort Zuckerman recently writing about Obama’s “competency crisis” in the Wall Street Journal.

Admittedly, to some, the need for Obama leadership is still a foreign concept. As Jonathan Capehart mused on “Morning Joe”—also on Friday, August 26—what can the president do to create jobs?

It all calls to mind the Saturday Night Live spoof of the 2008 Hillary-Obama debates. Whereas she was treated to boxing gloves, Obama was asked, Are you comfortable and do you need another pillow?

It’s confounding that in the midst of incalculable suffering, given Obama’s apparent cluelessness over how to nurse the ailing economy back to health—the unemployment rate among 16-24 year-olds, April-July, alone, was 51.2%, highest since 1948, when that statistic began being calculated—that anyone would give Obama a mulligan.

Notwithstanding, I would say, no, Obama can do nothing to create jobs—unless he transforms himself and does what great presidents do, namely: inspire the nation with a driving dream; eliminate job-choking regulation; lower job-killing taxes; support community banks that lend money to small businesses that create most jobs, instead of big banks courtesy zero percent interest rates, that, the Fed just announced, will be maintained through 2013—the same community banks that, because they know how to make responsible mortgage loans, hold the key to cleaning up the mortgage mess; reform health care the smart way by putting patients first instead of bureaucrats—government and insurance—and getting the incentives right.

But, this would require, well greatness, and really and truly falling in love with America.

And, that might be too much for a president who only inspires coddling.

Postscript: On Friday, September 2, the Labor Department reported zero jobs were created in August—such a dismal number not seen since 1945!

Posted by Mary Claire Kendall at 2:04 PM No comments:


Washington, DC, August 7, 2011—The Department of Defense (DOD) is now treating cyberspace as an "operational domain."

...our posture in cyberspace must mirror the posture we assume to provide security for our nation overall. Namely, our first goal is to prevent war. We do this in part by preparing for it...

This presupposes we have an enemy threatening us with cyber warfare.

Is China a purveyor of such threats?

It's hard to know. But, the recent McAfee report released in conjunction with the Black Hat and Defcon conferences in Las Vegas at which security experts and hackers meet to discuss the growing threat of cyber intrusions, should give pause to those tasked with defending our nation against such attacks.

The 14-page report all but accuses China of launching a five-year hacking operation aimed at a diverse array of over 70 organizations—including the US government, particularly its national security apparatus; UN Secretariat in Geneva; and US Olympic Committee—using malicious software from a single computer server to troll for sensitive data, as reported in The Daily Telegraph.

If true—a big if—China is not so much a "strategic competitor," in former President George W. Bush's words, as an "unscrupulous competitor," as Dmitri Alperovitch, McAfee vice president for threat research, described the perpetrator of this massive hacking scheme—robbing us of "economic advantage and national secrets."

"This," he added, "is the biggest transfer of wealth in terms of intellectual property in history."

Others say, not so fast. It's easy to mask cyber crimes in someone else's guise. However, the fact that USOC was hacked before the 2008 Olympic Games China hosted, heightens suspicion.

In the days when Reagan officials were referring to the Soviet Union as "the evil empire," China was considered "the threat," along the lines discussed in The China Threat by national security journalist Bill Gertz.

The worry then was that China's espionage was siphoning off nuclear secrets.

Upping the ante, Rear Admiral David L. Philman recently called China "a smart and learning enemy" in a hearing before the Senate Armed Services Committee. However we describe it—and whoever the source—the end game is to try and deal America a fatal blow.

We may be closer than we realize.

"The new battle space," says Freeman, "is the economy. We spend hundreds of billions of dollars on weapons systems each year. But a relatively small amount of money focused against our financial markets through leveraged derivatives or cyber efforts can result in trillions of dollars in losses. And, the perpetrators can remain undiscovered."

Freeman believes a coordinated plan of attack is currently underway.

As this author wrote on April 29, in "America's Fiscal High Noon":


Right now, it's 1941 all over again… We're just months away from another Pearl Harbor — potentially — and all we hear from President Barack Obama and company, as Governor Haley Barbour (R-MS) puts it, is "happy talk." ...According to... Freeman, what's referred to as "Bear Raid II" — phase III of an economic terrorist attack against the United States — is poised to fatally hit the U.S. Treasury and the U.S. dollar, causing the collapse of America's economy.

With DOD on the case, working synergistically with General David H. Petraeus, new Director of the Central Intelligence Agency (CIA), replacing Leon Panetta, new DOD Secretary—we have a fighting chance of avoiding such a calamity.

But, it will take a well-coordinated effort involving many more entities, perhaps akin to that William "Wild Bill" Donovan, Major General, US Army (Ret.) undertook at FDR's request, prior to Pearl Harbor, as Coordinator of Information, starting in July 1941—COI, morphing into the Office of Strategic Services, which later became the CIA—to mount the kind of effort needed to head cyber attacks off at the pass, and at their source—whatever that might be.

Originally published in AND Magazine on August 6, 2011.

Posted by Mary Claire Kendall at 11:23 AM No comments: