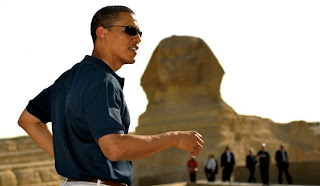 “Let me tell you, these past two years, they have deepened my faith,” President Barack Obama intoned at the National Prayer Breakfast earlier this year.

Let me tell you, President Obama, these past two years, they have deepened everyone’s faith!

The latest faith-building exercise is the President’s management of revolution in the Middle East, where strategically important energy supplies hang in the balance, while he’s simultaneously curbing American oil and gas production.

Just before that Tunisian street vendor set himself on fire, thereby inflaming the region with revolutionary fervor, Obama, on December 1, rescinded his March 2010 decision to expand offshore oil exploration in the eastern Gulf of Mexico and along the Atlantic coast—a moratorium expected to last at least seven years. All told, these regions have reserves equivalent to Norway (7.5 billion barrels of oil), and Canada (58.5 trillion cubic feet of gas); and the expansion, partially opening those waters, would have yielded enough oil to fuel more than 2.4 million cars and heat 8 million households for 60 years.

Under pressure, Bromwich, the top U.S. offshore-drilling regulator, said Tuesday, more permits would be issued “within the next week,” not months, while publicly excoriating the industry for what he considers its devil-could-care attitude in the wake of last year’s Deepwater Horizon oil spill. Bromwich told reporters, “I don’t know what the pace will be going forward. I don’t think anyone is in a position to say what that will be.”

But, Obama’s energy sleight-of-hand is a tea party compared to his management of revolution in the Middle East.

He was, of course, a little late to that party that, Sphinx-like, now involves solving a riddle—how to maintain stability in the midst of tectonic change—or be gobbled up.

Obama didn’t even mention the nascent Egyptian uprising in his State of the Union and failed to publicly encourage democracy in Egypt until crisis hit, leaving many scratching their heads given Egypt’s critically important role in Middle East stability.

With revolution spreading like wild fire throughout the region, prevention in Egypt—urging now-deposed President Hosni Mubarak, as President George W. Bush did, to prune dead branches of government repression and end incendiary injustice—should have been job one.

But, it was only when the fire was fully ablaze that Obama engaged—in spite of remaining neutral during the historic Iranian “Green Revolution” in June 2009. Nine days earlier, speaking at Cairo University, on the eve of the Iranian elections then shaping up as a sham, Obama highlighted US intervention in the 1953 Iranian coup, intimating that it catalyzed the 1979 radical theocratic takeover.  When protests erupted over the patently unfair Iranian elections, Obama remained neutral in spite of the fact that our interests and values perfectly aligned in that instance.

“It’s hard as hell,” wrote Leslie Gelb in The Daily Beast, to transform protests into democracy, and easy for the process to be hijacked by opportunists less interested in freedom for the people than power for themselves.

With all the danger now mixed with uncertainty, the Middle East needs all the prayers it can get.

Smart leadership—“`progressive pragmatism,’ with an emphasis on both words” as David Ignatius counsels—wouldn’t hurt either.

Of course, the Libyan invention doesn’t come close to passing the “dumb war” test Obama used in 2002 to oppose the Iraq intervention against brutal dictator Saddam Hussein, who makes Qaddafi look tame by comparison.  Our strategic national interest is non-existent: Libya has far less oil reserves, supplying 2% of the world’s oil, and does not have the ability to threaten shipping lanes like Iran.

Rather, a smart model is that employed by President Ronald Reagan when bombing Libya 25 years almost to the day that Operation Odyssey Dawn began—consulting Congress and outlining the mission clearly for the American people from the Oval Office—not Rio.

Absent smart policy that follows protocol, prayer will have to do for now, as Gelb urges at the end of this piece analyzing Obama’s misguided Libyan intervention.

Then, again, there’s always the Constitution, as then Senator Joe Biden articulated on “Hardball” in 2007, vis-à-vis Iran’s belligerence, noting President George W. Bush lacked “constitutional authority” to go to war “unless we were attacked or unless there is proof we are about to be attacked.”

Originally published in Pajamas Media in March 2011.
Posted by Mary Claire Kendall at 4:17 AM