June 21, 2011 update:  Former Utah Governor and U.S. Ambassador to China Jon Huntsman gave a moving presidential announcement speech today with the Statue of Liberty in the background - 30 years after Ronald Reagan announced for the presidency in the very same spot.  Daily Beast's John Avlon is concluding Huntsman is this year's GOP dark horse... time will tell...

April 25, 2011 update: Governor Haley Barbour issued a statement today announcing that he has decided not to run for president after all because he did not feel he had the requisite "fire in the belly" to endure the steep climb a presidential run entails.  He made the right decision: It takes a lot of fire in the belly to climb that presidential mountain, especially given the state of the Republican party today, and the corresponding Herculean task of unifying it around a singular purpose.  But, of course, Barbour will still serve as a party elder and power broker, helping the GOP win the White House, plus more seats in House and possibly the Senate in November 2012... that's the spirit, as of today, in which this article is published...

Politics is an art—the “art of the possible,” in President Ronald Reagan’s formulation.

Emerging from the crop of Republican presidential candidates is Mississippi Governor Haley Barbour, who knows the art of politics as well as his good friend, the late Lee Atwater, a politically-gifted South Carolina boy, who like Barbour, rose to the Chairmanship of the Republican National Committee. The Party thrived under both. 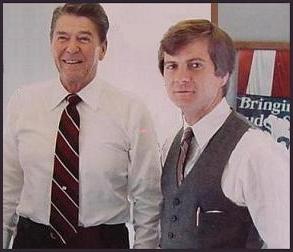 Lee Atwater with President Ronald Reagan during 1984 presidential campaign;
President Reagan survived an assassination attempt on his life 30 years ago
on March 30, 1981, almost ten years to the day before Lee died.

On a personal note, I first met Haley at the opening reception for Ed Rollins’ lobbying firm. Lee was there, too. Ed had just run Reagan’s landslide re-election, with Lee serving as his deputy. I remember Ed quipping to a reporter that the key to a winning campaign is finding a winning horse.

Haley is a winning horse.

He’s the Republican Party's Bill Clinton, without the fatal flaw: a Southern governor, who's a die-hard policy wonk, who knows and loves the game of politics better than anyone in the room—who also happens to be a schmoozer extraordinaire with dollops of Southern charm who genuinely likes people.

And, like Clinton, he's a baby boomer, born in the wake of the Allied World War II epic victory, who lost his father at a tender age.

Admittedly, he’s also a “dark horse,” registering as little more than an asterisk in recent polls of Republican presidential primary voters.  As the New York Times reported recently vis-à-vis their poll with CBS, "Gov. Haley Barbour of Mississippi may be well known along K Street — where he was once a lobbyist — and among Washington-based reporters who covered him when he was the Republican Party chairman. But 85 percent of Republican voters said they did not know enough about him to offer an opinion."

But, he is well known and liked in the most important state for a Republican presidential nominee in sealing the deal—South Carolina, where he handily won the recent poll in Charleston County.

At or near the head of the pack—nationally—is former Massachusetts Governor Mitt Romney, who makes a persuasive case for why he’s the one to lead America out of the wilderness.  And, he's neck and neck with Obama in the latest McClatchey-Marist poll.  The others cut fine figures, too, including former Minnesota Governor Tim Pawlenty. And, of course, Donald Trump is surging with his winsome, no-nonsense, tough-talk New York style.

But, Barbour is, arguably, the savviest politically—and, critically important, has the best sense of humor—making him odds-on-favorite.

Now, many sniff at Barbour’s Mississippi roots, other struggling states tut-tutting, “Thank God for Mississippi!” It’s not a compliment. But, another way to look at it is, if you can make it in the Magnolia State, you can make it anywhere. Governor Barbour has certainly made it—outfoxing trial lawyers on tort reform, enticing corporations to relocate to Mississippi, balancing the budget and, most recently, leading the nationwide war on state-budget-busting Medicaid.

Then there's that cockamamie idea that to be from the South, is to be a racist rube.  Surely, after electing the first African-American president, it’s time we broke through another barrier and elected the first Deep South Republican President. What better time than the Sesquicentennial of the Civil War. Then, let him prove how much he can do to raise the living standard of African-Americans—and every other race and culture that bears the name “American”—thus dispelling the In the Heat of the Night racial stereotype—reverse discrimination—once and for all.

Furthermore, some in the Republican Party were decrying one of Barbour’s opening forays into Iowa Republican presidential politics on the Ides of March, no less, for suggesting Republicans might look for budget cuts in the Defense Department and scale back in Afghanistan.

First, he ticked off the neoconservatives. And, for their outsized role in the Republican Party, not always producing outsized success (e.g., Iraq “we will be greeted as liberators” War), that might be a good thing. 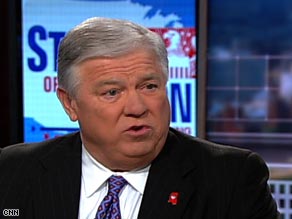 A late December Weekly Standard cover story racially stereotyped Barbour. Then, in a blog entry, “T-Paw v. Hee-Haw,” Kristol praised Pawlenty, i.e., “T-Paw,” for promoting neocon foreign policy, while lambasting Barbour, whom he dubbed “Hee-Haw,” for advocating, at a GOP dinner in Iowa, the aforementioned defense cuts and troop reductions in Afghanistan and deriding him because he “couldn’t identify” specific cuts. After skewering Barbour more, Kristol reasoned he smelled a “shrewd political operative,” who sees “an opening for a defense-cutting, Afghanistan-skeptic candidate in 2012.” Haley Barbour’s son, Sterling, smelled something else and sent Kristol an e-mail in which, according to Houston Chronicle, he “suggest(ed) Kristol, a conservative leader who served as an informal adviser to 2008 vice presidential pick Sarah Palin, is more interested in dividing the party than defeating President Barack Obama in 2012.”

Meanwhile, Kristol showered lavish praise on Obama for his Libya intervention, declaring in his blog after Obama’s speech on the offensive, “You’ve come a long way, baby.” 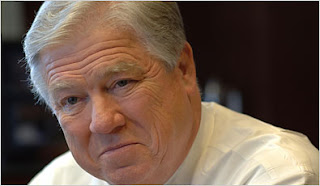 Second, on that Ides of March, Barbour simultaneously signaled to another group of Reagan Democrats, especially the Southern variety, whose sons and daughters do most of the fighting and dying in these too-often misguided Mideast ventures, who are mad as hell, they’re not going to take it anymore, that he feels their pain. Dave “Mudcat” Sanders, who watches white Appalachian voters, told The Daily Caller’s Neil Munroe vis-à-vis Obama’s Libyan intervention: “I don’t see any upside, I don’t see him gaining him any voters… (they’re) tired of body-bags coming back to the mountains…”

Third, he telegraphed he’s not afraid to ask a Republican sacred, ahem, elephant—namely the not-so-lean-and-mean portion of defense spending—to step up to the plate and do its part. After all, since gaping debt and deficits, according to Joint Chiefs of Staff Chairman Admiral Mike Mullen, now constitute a veritable national security threat, it’s only right.

Barbour was similarly prescient in Iowa at the late March Principles Forum, citing economic growth and job creation “for our people” as priority one—spending cuts being “the means to an end”—noting “my old friend Fred Smith, my fellow Mississippian,” FedEx CEO/founder’s “great saying”: “The main thing is to keep the main thing the main thing,” underscoring Barbour’s other “main thing”—electing a new president in 2012. 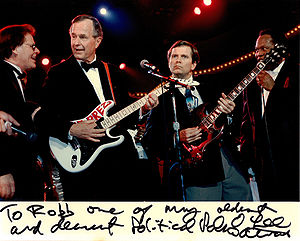 Lee Atwater 'jams' with President Bush at the
Celebration for Young Americans Inaugural event.
Inscription on photo is to "Robb Austin."

Welcome to the 2012 Republican presidential race, where the ghost of Lee Atwater won’t be far behind.

As former Secretary of State James A. Baker III, Bush-Quayle ’88 Chairman, said in his moving eulogy at Lee’s funeral twenty years ago on April 4, 1991, when it came to the game of politics, Lee was “Machiavellian… in the very best sense of that term.”

Lee knew how to win. 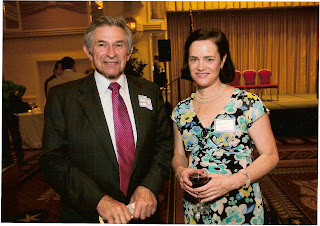 The author with Paul Wolfowitz, Deputy Defense Secretary during the Iraq War,
at a reception for former First Lady Nancy Reagan, June 2, 2009,
the day the bust of President Reagan was unveiled in the Capitol Rotunda

So many memories about Lee have flooded my heart as I wrote this piece.

In August 1985, I interviewed with Lee after he had been jogging in the hot summer heat. He slouched back in his chair with his knees leaning against the desk, as I, dressed prim and proper, did my best to answer his questions. What a character!

I got a job instead at Ed Rollins’ firm, Russo, Watts & Rollins, right up the street from Lee’s firm in Old Town Alexandria. (Watts had produced the famous “Morning in America” ads for Reagan-Bush ’84 ).

Lee was always so gracious and encouraging to me when he would call to talk with Ed. Of course, they were great competitors: Lee would schedule these early morning breakfasts at 7:30 a.m., leaving Ed pleading to meet at 8 a.m.; but 7:30 a.m. it was!

Then, I remember that day in February 1990, when I was watching Lee being interviewed on TV with his cousin Steve Page, a fellow political appointee at the Department of Health and Human Services.  In the course of the interview, Lee gave out his jogging route—a security breach, which shocked Steve, given what a target Lee was.

A month later, it became clear why Lee had been so careless. That day Steve and I went to a White House arrival ceremony for some dignitary, I can’t remember which one. All I could remember was how shaken Steve was because Lee had had a seizure the day before while speaking at a fundraising breakfast for Senator Phil Graham (R-TX). He was soon diagnosed with a brain tumor.

I started getting together with Steve to listen to tapes on alternative therapies that he thought might help Lee. In April 1990, after a few of those sessions, when it became clear Lee’s condition was much worse than first contemplated, I told Steve I would pray for him through the intercession of this holy priest, Josemaria Escriva de Balaguer, being featured in Roland Joffe’s soon-to-be released film, There Be Dragons. I told him Escriva was on the way to being canonized, explaining that asking him to intervene with God was like asking Lee to intervene with the President. I prayed novena after novena, 27 in all; then in December I got really sick with the flu, and slacked off. On May 6, 1991, totally exhausted, I stayed home and read the papers, cover to cover, and, lo and behold, that day there was the story of Lee’s conversion in December 1990.

In the waning days of Lee's life, he apologized to Michael Dukakis for saying of him he would “strip the bark off the little bastard.” It was a gracious gesture and, I think, was Lee’s way of saying, ‘The ’88 campaign was an extremely rough fight and I’m sorry.’

Of course, Lee always knew his best campaign tactic was Dukakis himself; Dukakis’ ride in that M1 Abrams tank, where, Lee observed, he looked like Bullwinkle, was a classic.  That day on the campaign, the sense that the tide had turned, as, indeed, it had, was palpable.


Mary Claire Kendall is a Washington-based journalist and screenwriter. She's published frequently in the Washington Times, Washington Examiner, San Francisco Examiner, and Pajamas Media, among other national venues.  A graduate of Wellesley College, she has extensive political experience including a stint as one of Lee Atwater’s “30 nerds” on the George H.W. Bush presidential campaign. She served as a Reagan political appointee at the U.S. Department of Education, 1987-’88; and as a George H.W. Bush political appointee at the U.S. Department of Health and Human Services, 1989-’93. For more information, see www.maryclairecinema.com.